Behavioural Experiments: A Methodological Guide "How do non-standard biases and preferences affect us during the COVID-19 crisis?" 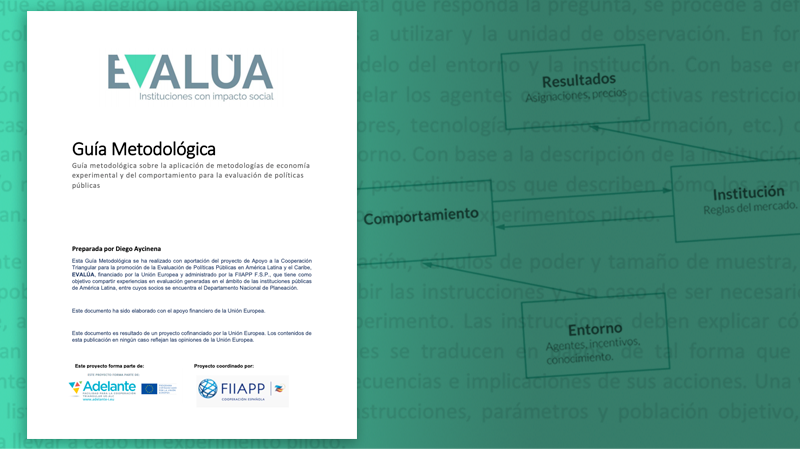 Classical political economy states that human beings are what is known as "homus economicus" which, put simply, means that we make decisions by rationally balancing the cost and benefit of our actions, so that the latter is greater than the former. However, since the middle of the 20th century, it has been proven experimentally that our actions often deviate from this way of acting.

Within the framework of the EVALÚA project, a Methodological Guide on the application of experimental and behavioural economics methodologies for the evaluation of public policieshas been developed. The Guide compiles the most relevant findings drawn from behavioural experiments from the beginning of the discipline 50 years ago until today, so that they can be optimally used and taken into account by decision makers.

These concepts imply that human behaviour deviates from the rational because it is influenced by biases, intuitions, and false beliefs. For example, aversion to loss is a very common behaviour (bias) that implies that we prefer not to lose now rather than to gain more later on. Myopic aversion to loss combines the above with a risk situation, and can lead us to act in such a way that the medium-term result is harmful. When we are faced with situations involving risk, our perception is completely different regarding losses or regarding gains, as showed in the Prospect Theory: in a risk situation, we prefer not to lose now than to gain later, i.e. in the event of a possible loss, we take risks, whereas in the event of a possible gain, we seek security.

The present bias, or self-control problems involve inconsistent actions and show that our willpower is limited. We can make a decision and then postpone it more or less indefinitely. It often involves spending money to try and break our lack of will or action, for example, buying "miracle products" instead of starting the planned diet.

Social standards models suggest that when choosing an action it is not only the benefits and costs of that action that matter. It is also taken into account whether that action is in line with what the reference group (social circle) normally does and what it considers appropriate to do in that situation. This fact determines that our decisions are highly influenced by the social environment in which we live, which can weigh more than the balance of the cost and benefit we can draw from our action.

Hindsight biasis the tendency of people with knowledge of an outcome to falsely believe that they would have predicted the outcome of an event, exaggerating the similarity between their ex post beliefs and those that were their beliefs prior to an informational event.

The preference for the prominent, despite not being a rational strategy, leads people to choose the most striking option or one that stands out from the rest for spurious reasons, such as aesthetics or the preferential place where the option is found (supermarket shelf, for example).

In short, many of these phenomena (self-control problems, social preferences, social standards, over-projection of preferences) are due to our emotions and feelings. The psychological literature shows the role of emotions as a mediating mechanism of our actions. However, these psychological findings have recently started to be incorporated into public policies.

Biases, false beliefs and non-standard preferences during the COVID-19 crisis

They affect us in our decision making and in our daily lives more than we think. Since the onset of the coronavirus crisis, we are seeing, for example, that the aversion to loss bias has influenced the decision-making of many governments, especially in the beginning, when they were not yet aware of the magnitude of the phenomenon that developed shortly afterwards. Taking stronger isolation measures was in many cases delayed for fear of economic impact, without objectively analysing that an earlier "loss" could save many later "costs". It is closely related in this case to the Prospect Theory, which includes the earlier bias in a risk situation. These biases were added to others that were also frequent, such as optimism and the illusion of control, which caused many people to resort to useless remedies, pseudosciences and superstitions, circulating an enormous number of hoaxes and lies about the pandemic.

We are also recurrently observing the above mentioned bias of Hindsight, in a multitude of opinions around us, to such an extent that it seems that a majority of people already knew what was going to happen from the first moment and what were the best decisions to be made.

The models of social standards have clearly influenced our behaviour during confinement, and situations have been observed in which non-compliance or stricter compliance with the standards has been conditioned by what was happening in the immediate environment (family, neighbourhood, municipality).

On a psychological rather than economic level, we have also seen some political or social leaders who have encouraged severe breaching of the regulations, questioning their effectiveness or legitimacy. The bias of obedience to authority implies that, if an authority allows us to breach the law and even cross the border of our morality, it raises our propensity to do so, as has recently happened in certain cases.

The optimistic bias, which leads us to project our own desires on the objective data, as already mentioned, can also be observed in this stage of de-escalation. We tend to think that the risk is minimised and behaviours are observed that are far from taking the precautions that would be necessary if we analyse the data objectively.

These are just some examples of how our behaviour and the decisions we make deviate from the rational, both in small decisions and in transcendental matters. Knowing our deviations and mental shortcuts can help us improve our individual decisions, but it is crucial for decision makers in the field of public policies.

One of the most frequently used behavioural interventions for public policies are the so-called nudges. Nudges are interventions that seek to influence decisions by modifying the architecture of decision-making, without substantially modifying incentives or restricting options, by exploiting the various findings of behavioural economics.

Nudges have become very popular because they allow for low-cost interventions based on soft or libertarian paternalism, without resorting to prohibitions or restrictions. In addition, several successful cases of interventions using nudges have been documented, for example, to increase organ donations, quit smoking through commitment contracts, reduce operating room deaths through checklists, increase loan repayment rates through personalised reminders, or increase tax compliance, among others.

However, nudges must be designed with care, otherwise they may be ineffective or even counterproductive or used for other purposes. Some of the above-mentioned biases may lead us to overestimate the probability of success of nudges. Interventions that show positive effects tend to receive more attention, and those that show no effects tend to be ignored or stored away for oblivion. Furthermore, it has been found that for some interventions, the effects tend to be short term and long term void effects are ignored. Therefore, the probability of success of a behavioural intervention or a nudge will be as good as the behavioural foundation on which it is based.

Behavioural experiments have been widely used in consumption, political marketing, investment and finance, among others. Their application to public policies, in terms of their design, management and evaluation, is much more recent. However, there is already a small tradition that allows us to draw some important lessons:

The Methodological Guide is a tool at the service of institutions that allows them to select the type of experiment they want to carry out and outlines the road map for its implementation, defining the steps for its development and describing its advantages and limitations.

[1]  Prepared by Diego Aycinena Abascal, Professor at the Universidad del Rosario in Bogota and Visiting Researcher at the Economic Science Institute of Chapman University in Orange, CA.